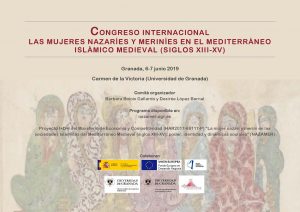 Within the framework of the NAZAMER Research Project, an International Congress on “Nasrid and Marinid Women in the Medieval Islamic Mediterranean (XIII-XV Centuries)” has been organized, which will take place in the Carmen de la Victoria   on 6-7 June 2019.  Conceived from a multidisciplinary perspective that will cover Arab and Islamic studies, medieval history, archaeology and architecture, it will address different aspects relating to the women of the Nasrid kingdom of Granada and the Marinid kingdom of Fes during the appointed era, as well as comparing their vital realities with those of the female collectives of other contemporary societies, such as that of the Mamluk kingdom of Egypt. As a practical activity, a guided tour (upon registration with fee on the first order of reception) will be offered for the women’s spaces of the Alhambra by the afternoon of June 7.  The Congress may be validated by 1 credit for students of the Degree of Arab and Islamic Studies and the Degree of History if at least 80% of the attendance is met and a critical memory of the contents offered in it is delivered.