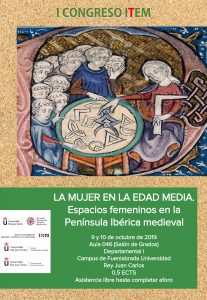 During the 9th and 10th of October 2019, Bárbara Boloix Gallardo participated in the congress “Women in the Middle Ages. Women’s spaces in the medieval Iberian Peninsula”, held on the Fuenlabrada Campus of the King Juan Carlos University (Madrid). This meeting, organized by the Research Group “Identity and Territory in the Middle Ages (ITEM)”, has quoted a number of researchers to discuss women’s spaces from different perspectives.

The IP conference of our Project has focused on “The female residential spaces of the Nasrid dynasty (XIII-XV centuries): from the dwellings to the last abodes”, a topic in which she has identified and analyzed both the female presence in the main residential areas of the Alhambra, and some of the properties that must have belonged to women of the Nasrid dynasty , such as the palaces of Daralhorra and Cetti Meriem, or the Orchard of Horra Buthayna in the Nasrid capital, Granada. 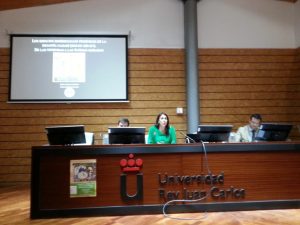